RSS Feed
On Drawing: My Secrets →

Taking the slow road, and The Road less traveled

* a flagellation on the sole of my feet! with a long, and thin stick crop from a limb of an olive-tree,  wich I still remember till to today.
_a quick mnemonic method of no harm, used a longtime  ago, by a Taleb, a teacher of sort, for teaching kids the Koran, in Algiers of old. Usually the momentarily little burning on the little soles, it passed  a little while after it was flicked, but the learning of the Koran by rote will last forever. Similarly  to that a method, in Zen Buddhism teachings_  Bashõ, the Zen Master used ago his stick to strike a naïve monk, for  to let him remember his scriptures, it is called Satori. See Zen in Japanese Culture_Suzuki

“You must learn some of my philosophy. Think of the past as its remembrance gives you pleasure.” _Jane Austen

Then, it was unthinkable for me, of such thing to be on affair with writing; a would be-writer, some forty years ago. Because, it was an affair.

The first time when I started doodling Arabic calligraphy with a piece chalk on a slate; it didn’t occur to me then, nor having the slightest thought to be one day a writer,  rather I was in awe before the white chalk handwritings on a blackboard, that I rewrote meticulously on my slate tablet, at first, then on a double-ruled lines handbook, later on, like any other kid on my age, a longtime ago, at the madrassa of the small village, where I spent the precious years of my childhood.

To ephemeral scriptures of verses– a write, read, erase, repeat process–until to a fully memorized  Juz’e Amma, by rote; an entire chapter of the holy Koran, with few  more, about two further chapters that I vaguely remember, and by copying the drawings à la Miro sort of, an Art naïve that the Taleb—an Arab teacher of old Algiers, had hard time to squiggle the pictures on the blackboard, which represent a livestock, somehow, a similar subject of today’s lesson of Natural Sciences. Hence, I acquired the stills, I think, of what we call today by–drawing with the right side of the brain. The lines of the drawings were so vain that we had hard time also, trying to copy them back to what resembling to a fairly closer image; which attempts made it worsen more than to look like an abstract Art. Not satisfied by my own drawings, then I waited until to the evening, when my father came back home, I asked him then, to draw me a picture with in it something like a horse, a cow and the like grazing in a meadow, on my –(kurass), a notebook, that is, I was in tears, after I had torn-off the drawings-horribly made page. Which is, he did it right away ; with a facile astonishing gesture that heft left me jaws dropping.

My fears, once tamed after a few tentative squiggle; I arrived to refine the drawings, to some composition that resembled somewhat more accurately to the image of the book pictures. Now, with some distance I think, certainly, that the acquired skill was inherited from my parent, that some gene might be running in the family. Sometimes after,  showing brilliance, I was considered then as a learned kid, whom they were proud of his precocity. Especially my mother who was keen to insist after my father, that it was essential for me to study French, not that my father disagreed with it, by all means, he was also open-minded, and well-educated; but she was also my first home teacher, in that she taught me the few words of vocabulary that she learned from exchanging social niceties with their French neighbors farmers women, ago when she was still a little girl.

Nevertheless, just for the anecdotal_ on those times, it was seen as a blasphemy, a heresy  to go to the [ Rummies’ M’cid.] the Christians school, that what we  called it a M’cid, ago. Then after that little push of her, I was sent to the French school, which was two miles away of the Madrassa, on the crests of the hill. It was an all new event for our little black hair and blonde  kids heads; the language, the writing, the reading, and not to mention the watercolor painting lessons, and all the secrecy and magic around it: that is, to be understood,  that we were still being considered then as Indigenes, slaves—the lesser status for Arabs and Jews as citizens, under French colony rulers, a down state of the status, in the 18th 19th centuries-[known for as the Indigenat code]– decreed by Louis Napoléon II, and still used under Vichy French government. But, let us not be distracted by those gloomy ages, and let us get back to our lambs, like they say out there in Paris .

For spending hours of painstakingly handwriting with a nib soaked in inkwell, going back and forth pen to paper on exercises notebook double–line ruled, blotting paper between the pages, with violet-blue ink, stained fingers, and the catchy smell of ink poured in  inkwell, the classroom was fragrant; that what is left for remembrances of the French lessons of golden. To recall, that it was in those special moments, that I had mastered drawing, by being  studious , delicately applications to a fault, besides, that I was one reaching for reading books. More, because of long hours spent on passionate tales, dove head and tail, obsessed by those damn-good illustrated books in their French vernacular, a point of fact is; those books,  that I reproduced integrally the illustrated images of my marvel heroes, so meticulously refined to perfection, things that we usually treasure for later.

Once, in J.H. School, it was more dedicated. For, people were serious about reading and writing, in a surge of enthusiasm, in that it was just after the Independence of Algeria, and were imbued with a formidable yearning to fill the lost years of backwardness of the school during the time of war. I remember  my teachers’ names, one by one, of that time where they were so eager to push us to do the extra mile of literacy,  to be quite ready for a normal back to school, and on time for the coming year. 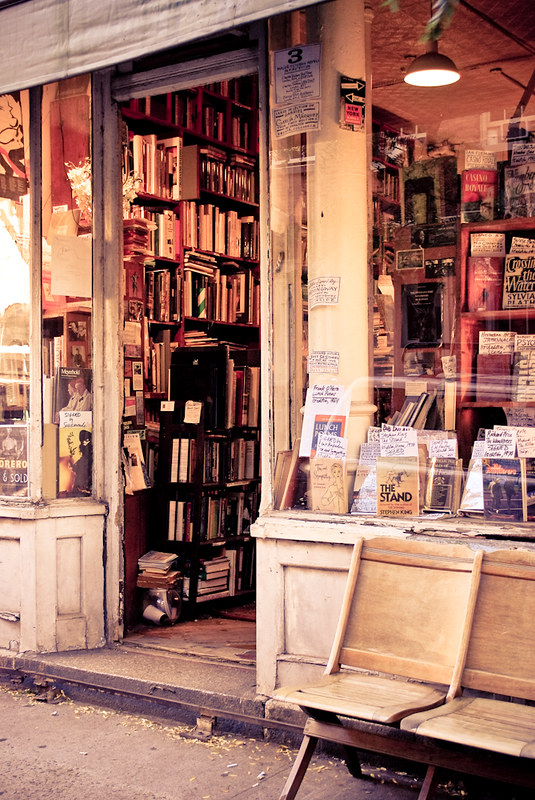 This image is exactly the like of  bookstore my father owned in the 60’s, in Hydra, a small chic town in the heights of Algiers_Algeria.

So vividly to remember, that I used to sit hours in the room in the back of the boutique-store that my father held, reading those absorbing lit’le magic imaged comic books; that we called “the illustrated.” The book stand, it was in front of my school I used to go to, wich was just across the street, so I don’t have to travel too far, and was pressed to return reading those absorbing little magic imaged books, and doing my homework, giving hand to my father at rush hours, when people leave to work, and back home. In counter-part, I have to wake up early to have a ride, and do stay until late night waiting to closing hours. That is, until to one day, when my teacher of French came in around for some errand; I was so deeply plunged into the intrigue of the story that I did not even notice him, at first. However, when he gently grabbed my ear and begun rubbing it with his two finger, and persist to teasing me, while I managed to keep away his hand out of my ear in vain, than aghast, I raised my eyes to see him laughing, to my surprise  that “my eyes were so wide open, that one can hung one’s  hat.” like you might say_Courtesy to Mark Twain.

He took off my hands the little book, and tossed me one  of those real books for teens to read, the ones that were famous–with a the red and gold jacket, an edition series, a sciences-fiction issues, which I recall them by the dozen, aligned running on the shelves of the bookstore, that I had read a lot of them (reluctantly, at the beginning.) He told me that, those illustrated ones are not so good for reading; it contained a vernacular French, which had bad words in it, not so good for a composition writing, and that I will be given an extra credit as rewards, for reading the red-and-gold book instead of them illustrated ones. That is, it will enrich my vocabulary, he said, it will perfect my grammar, locutions and so and so. On his precious advice he went on, he left the store without giving it back to me; then while I was sitting there under the amused regard of my father; the little book was still in his hand when he had already stepped out of the door, sadly as I sat still, I was formidable then, watching him waving at me with the little illustrated book his fingers tips hanging it, like someone departing,  as he was rimming those verses while he was still laughing; I wished he could have returned it to me before he left, as a wish is the father of thought

“depart is such sweet sorrow…”

Words and Pictures from the Middle East